Xbox series s vs ps5 – An ideal solution for every gamer 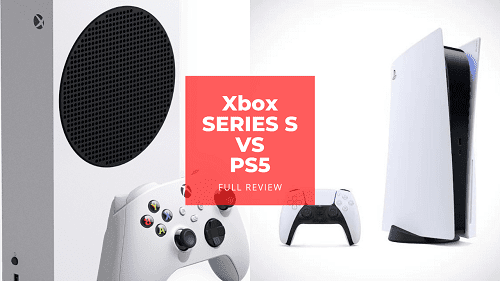 PS5 and Xbox series s. Both are the best solution for every gamer. In this blog, we compare these two consoles. Which is better for you?

Playstation 5 looks like a spaceship or a DVD player. Anybody cannot say that this is a gaming console without knowing about this. It looks nice and many people like this design

Xbox series s looks like a speaker. If you keep this on the side of the TV or monitor then everybody says this is a speaker. The design of the Xbox series s also looks good. Microsoft gave a very safe and simple design.

Both consoles do not look like gaming consoles. The design and build quality are very unique.

The controller is the main thing in every console. And the controller of both consoles is very good, but we have noticed some issues.

Playstation 5 controller is very modern. There are some big changes in this controller from the previous controllers. Especially the vibration motors and the triggers. The interesting thing in thiggers is if you are playing a shooting game like Call of duty. And you are using a heavy adult rifle. Then if you click on the scope trigger you want to use more energy but if you are using a pistol then you easily open this scope. And the vibration is now at the next level. Triggers will also vibrate now. If you use a heavy gun then this will make a next-level vibration. But if you use a pistol or something like that then it will vibrate slowly.

Playstation has a lot of exclusive games which you can only play on Playstation. There are some famous games like God of war, Uncharted 4, Uncharted: The lost legacy, The last of us 2, Marvel’s spider-man, Ghost of Tsushima, and some famous AAA titles. But the games on PlayStation are very expensive. But you can purchase a game pass called Playstation plus. This is membership. If you buy this membership then you want to pay almost $12 per month. And you can play almost 3-5 games.

Xbox also has its exclusive games like 12 Minutes, Dead Static Drive, Exo One, Lake, Last Stop, etc. Xbox games prices are as low as Playstation games. And if you buy battlefield games then you will get 85% off. You will get Battlefield 5 for $5 only. Xbox also has a gamepass like Playstation called Xbox game pass. In the Xbox game pass, you will get so many games. More than 100 games. If you buy the ultimate membership then you can play these games on pc, console, and Android. You can also buy the memberships for only one platform.

If you compare these consoles then you cannot find any difference. But if you want to compare this then you will play games on 1080p. Because the Xbox series s is not made for 4k.

There is a problem that is available on both consoles. And this is Hard disk space. In the Xbox series s you will get 1 TB of available space. And in Playstation 5 you will get 800Gb available space. And these spaces are not enough. If you download any game on these consoles then you can see only one game is around 100-200Gb. You can download only 3 or 4 games. But Playstation 5 has released a new feature which is like backup & restores. When you don’t want to play any game you can backup this on your external hard drive. And when you want to play this game again you can restore this. And Sony said that the whole process will be very fast. You don’t need to wait for a long time to backup and restore games. But Xbox doesn’t have this type of feature.

Thanks for reading our blog. Hope you enjoyed this blog.

Which is the best console in low budget?

The Xbox series s is the best console for low budget. To know more visit our blog.

Which is best console for me?

For read more read our blog.