Why PC games are better then Mobile games? – Future of mobile gaming 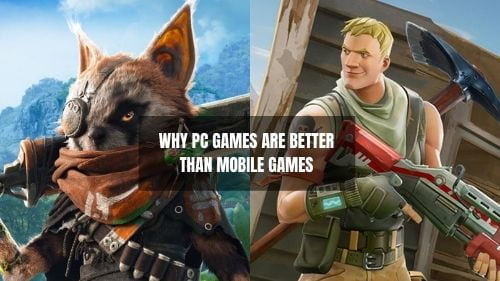 Why PC games are better than Mobile games?

When you play games on a pc then the PC will heat. But if they get too hot, then they will be ruined. In pc, we got a case. And a fan mounted on the top of the CPU. And there are many fans inside the box that never let the CPU get hot. The same thing happens with consoles.

But on mobile phones, we don’t have space like a PC. So the engineers need to adjust many things in a small place. If you see the processor of a mobile device then you can see this is very small as compared to a PC. And if you play games on a smartphone for 2-3 hours then your smartphone will be heated. For that reason, Mobile games are not very high graphic and realistic as PC games.

#2  The next reason is free games and paid games. If you store where you can buy a pc game then you can see 95% of games are paid. But if you see the mobile games then you can see 95% of games are free. Because developers can earn from the game by giving ads on the game. But most the PC games are story-based and developers cannot give ads in this type of game. And if you make this game premium it means users want to buy this game to play. Then most of the users will download the pirated version.

#3  The next point is control limitations. On the PC we got a keyboard and mouse, but on smartphones, all the controls are adjusted in a little space. So, on smartphones, we don’t get as much comfort as PCs.

Some time ago a new game was released called Cyberpunk. But there are many bugs in these games. So, Sony removed this game from the Playstation store.

But if we see the Play store then there are no limitations. Every kind of game is available there. And that’s the reason why most of the time we cannot find good games in the Play store. And most of the games look good on the gallery but after downloading we can see the truth.

#5  The biggest reason is storage. If you see the PC games then you can see their size is very large like GTA V are almost 90 Gb, COD warzone is almost 197 Gb. In PC games developers have no limitations with size. But in smartphones, it creates a big issue. Because on average smartphone storage is 32 Gb, 64 Gb, or 128 Gb. There are many highs quality smartphones available where we got 256 Gb and 512 Gb. But they are very expensive. Everybody cannot afford this.

Very big companies are taking mobile gaming seriously like Ubisoft, Activision, EA, etc. They are making games for mobile. Because they know that mobile gaming will be very famous in some years. Because a budget smartphone is 15-20k. But a budget PC costs around 30-40k. And most of the parents were not convinced to buy PCs or consoles. But they give me a mobile phone. Because mobile phones are very important. And that’s the reason mobile phones sell more than computers.

These are the reasons which make PC games better than mobile games. You can share your thoughts in the comment box. And don’t forget to subscribe to our newsletter to get more updates about gaming.

Very big companies are taking mobile gaming seriously like Ubisoft, Activision, EA, etc. They are making games for mobile. Because they know that mobile gaming will be very famous in some years. Because a budget smartphone is 15-20k. But a budget PC costs around 30-40k. And most of the parents were not convinced to buy PCs or consoles. But they give me a mobile phone. Because mobile phones are very important. And that’s the reason mobile phones sell more than computers.

Will PC games come to mobile?