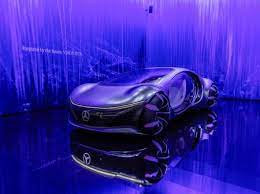 Is it not annoying to have to enter a destination address in your car’s Sat Nav via its full-screen QWERTY keyboard or manually skip the current track through the stereo using the extremely convenient on-wheel switch?

Imagine your car thinking about what you want to do, or where you would prefer the song to stop playing. Mercedes will be displaying this concept at the IAA Mobility 2020 show in Munich, Germany.

The German company has integrated brain-computer interfaces (BCIs) into its Mercedes-Benz Vision AVTR Concept Car. Visitors to the IAA Mobility 2020 show will have the opportunity to test the mind-control feature.

The Vision AVTR was first unveiled at CES 2020 where Mercedes revealed the concept was able to recognize drivers by their heartbeat and breathing patterns, but the inclusion of mind-control is a new addition.

As it stands now, the technology requires that the user wears a BCI device equipped with wearable electrodes at the back of their heads. This detects brain waves and can translate them into actions for vehicle.

Mercedes claims that anyone can use their thoughts to perform certain functions in the car after a brief calibration of about one minute.

The digital dash requires users to focus on specific light points. The system will determine which one by using the BCI device. This triggers a preset function.

Mercedes explains the system more in detail: “The BCI device measures neuronal activity at cortex in real-time. It analyzes brain waves to determine which light points are being used to direct focus and full attention.

“The higher the neuronal activity, the stronger the focus. The vehicle then activates the desired function.

Mercedes says that while there is a working prototype that can be tested, the technology will not soon make its way to consumer cars. Mind-control features will not be in daily life tomorrow, it says. They are science fiction, however.